One of the fascinating aspects of the human mind, and often a frustrating aspect, is when we have an “a ha” moment, a lightbulb that goes off in our mind that makes something once unknown, seem perfectly clear. The fascinating part is a wonderfully clear vision on something that was once unseen-like LASIK surgery for the brain. The frustrating part is finally realizing something, potentially an important something, was right in front of your eyes, and you missed it for years. 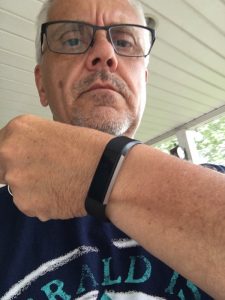 I’m the “old dog” mentioned in the title. A 51 year old guy, who has had an on/off relationship with physical fitness my entire life. Staying fit, eating well, and being physically active while raising three kids and traveling a great deal for work, is never easy. I certainly had some low points. But, as the kids became more independent and the job changed, I’ve felt happy that I was winning the battle of being fit for several years. Unfortunately, I think I was wrong.

Ok, I have been reasonably fit for several years now. Getting in my cardio, doing a lot strength training, discovering and enjoying Crossfit. What I was wrong about was treating physical fitness as a battle – and that’s where the Fitbit comes into play.

I’m an internet junkie, and an information hound. Having an unquenchable thirst for information isn’t a bad thing, especially if you are looking for information related to physical fitness and healthy living. The problem wasn’t the information, but that the wealth of available information gave me too much confidence that “I had this fitness thing all figured out”. I have known about, and have friends and relatives that have used activity trackers for many years, but I never purchased one. It wasn’t that an activity tracker cost too much – I have thousands of dollars of weight stacks, dumbbells, kettlebells, and miscellaneous cardio equipment, so a $200 activity tracker wouldn’t have been unreasonable. Looking back, I probably never bought one because I thought they were “too simple”. How could a band around my wrist possibly help me? After all, I had already read 14,981 articles/blogs/websites related to fitness.

Luckily, another personality trait – or personality flaw if you asked my wife, led me to buying a Fitbit Alta. I love bargains, and I love Amazon Prime. Those two loves intersected with a one-day only sale on the Alta for $69! With free 2 day shipping, of course.

My new Fitbit Alta arrived, and I quickly set it up and downloaded the Fitbit app to my iPhone. I configured my Alta to remind me to get 250 steps in for 11 hours a day, cute feature I thought. I also set some goals in the app – 10,000 steps a day, 5 miles, and 30 minutes of “activity”. Figured it was child’s play, but I like to follow rules, so I set everything up as recommended.

So now I was an official Fitbit user. In the beginning, I was mostly interested in the sleep monitoring and reporting feature. I figured that I had the daily activity stuff already figured out, but I hadn’t figured out a way to monitor my sleep patterns – because well, I was sleeping.

I usually set my exercise plan for the week first thing Monday morning. I am no longer a jogger due to microfracture surgery on my right knee, but I always got in my power walks with sprint intervals, my Crossfit, and weight training. The first day I wore my Fitbit I found it a little annoying. I work from home, sitting in front of a computer and on conference calls, most of the day. At 7:50am, my wrist vibrates and tells me I have 230 steps to reach my 250 for the hour. Similar “friendly reminders” come before each top of the hour, until noon. I hadn’t moved much, but I’m going for 42 minute power walk now (yes, I had my loop timed to the minute). I figured that would catch me up, and silence my little reminders for the hour. After finishing my walk, I was a bit surprised that I still had less than 5000 steps. I worked the rest of the afternoon – getting buzzed every hour that I was inactive. I did some Crossfit that evening with my wife, added in some dumbbell work, and I completed a “good day” of exercise according to my old standards – standards that I learned from the Internet, so they had to be right!

My Fitbit app basically laughed at me. I was active for more than 30 minutes in total, but I didn’t come close to 10,000 steps or 5 miles – and most importantly, I was basically inactive for the vast majority of the day. I decided to humor the simple device on my wrist the following days. Mostly because I’m hyper competitive and hate losing at something, and it’s especially painful losing to a skinny watch. Over the next few days, I figured out that you can ALWAYS find the time each hour to squeeze in at least 250 steps. And, spending those 10 free minutes that pop up during the day getting in some steps, instead of reading articles on fitness, actually improves your fitness – who knew?

So, I had figured out how to beat my simple Fitbit friend! I’ll keep that up, and get back to understanding that sleep pattern thing. I still planned my exercise for the week each Monday morning, but I found that I wasn’t taking as many power walks as I used to. By the time I’d go for a walk, I’d often have 5000-7000 steps in, and I knew I would blow past 10,000 for the day. I started doing more Crossfit and strength training during my “walk time”.

Interesting things started happening. I began sleeping better than I had in years, and without changing my diet, I was losing weight. I also was adding more muscle, and generally feeling better. Next I took my Fitbit on its first vacation – technically my wife’s and my beach vacation, but I wore my Fitbit throughout. I kept up with my daily goals, usually exceeding them because I had more time, and a funny thing happened. After eating and drinking “vacation calories” for 7 days, I came home and had only gained a pound or two. That was unheard of for me. It also shouldn’t have happened, because I wasn’t in my typical battle with fitness while on vacation. I took a “vacation” from fitness that week, so I could enjoy our vacation.

That’s when the lightbulb went off. Without me realizing it, my Fitbit had changed my lifestyle. The physical fitness gains came in the form of losing some weight, adding some muscle, and sleeping better. The mental fitness gains came in the form of no longer feeling like every day was a battle with physical fitness. It is surprisingly draining to battle something every single day, and I have found that I’m much happier now that the battle is over.

This is not intended to be a product review. I literally stumbled upon the Fitbit Alta, and only purchased it because of the deal. I’m sure there are many brands, and models, that are as good or better. I’m sharing my experience in case there’s someone like me, who is reading the internet for the next great “fitness” idea, and happens to stumble upon this story. I’m not sure if I had read this this exact account 5 years ago, what my reaction would have been. I may have discounted it as something “too simple”, but a $69 Fitbit has turned into the best piece of fitness equipment that I have ever purchased. I would be very happy if a fellow fitness fanatic in cyberspace happened to spend 10 minutes reading my story on the Internet, and it lead to a lifestyle change similar to what I’ve experienced – ironically, instead of spending those 10 minutes getting in some steps.

Echoed footsteps reverberated off the stone walls and marble floors. The measured pace an agonized pounding that was nearly enough to drive Dylan mad….