He had often wondered what his reaction would be. He had dreams involving this situation played out in exquisite detail many a night. The results were sometimes stoic, often heroic, and thankfully, just as often ended with the dream being abruptly terminated just before the disastrous climax. He had rehearsed numerous scenarios in his mind as he trod, ever vigilant, through the deep forests or cactus littered hills of the Sonoran Desert where just such an encounter was a constant likelihood. But never had he envisioned it playing out in this fashion.

It was early morning, with the evidence of the previous night’s monsoon storm strewn everywhere. Shingles from houses blocks away, limbs from heat-brittled trees, a cheap dollar store ball that had popped somewhere on its journey, and the twisted wreckage of a portable basketball structure laying awkwardly on its side bore evidence of nature’s fury. The earth at last released its pent-up aroma, freed by the moisture that it had been denied for months. Though the sight of the carnage bore on him somewhat, the exhilaration of having survived the destructive force of nature mingled with an appreciation of seeing her transformative, nurturing side more than compensated, and his soul was at peace. 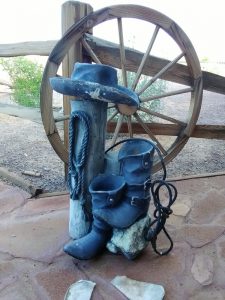 He was lost in contemplating this odd dichotomy as he went about the business of assessing damage and commencing remediation. His heart sank as he saw that a fragile porcelain water feature had toppled from its perch onto the jagged red shale at the edge of the walkway that surrounded the pedestal that normally provided it a convenient place to rest. He picked up the sculpture and lovingly inspected it for the damage that he knew he would inevitably find. He saw none. This was startling, given the height from which it had fallen and the delicate construction. He determined that putting it back on its support would only invite further disaster when the next storm hit, which was predicted for the very next evening. Instead he thought the safety of the porch on the lea side of the heavy glider would be best for the next couple of months while the monsoon season blew itself out. He gingerly carried the sculpture, its power cord dangling unceremoniously to one side, as he continued to search for any sign of hidden damage, naturally expecting the worst, as the object in question was held it in high regard by his wife who had received it on some bygone anniversary or other. It fit the theme of her life, with western boots and hats, lariats and fenceposts molded into a stunning expression of the unquenchable spirit of the desert and those who had made the desert their home, combined with the life-giving fluid that sustained that life. So his relief was genuine as his gaze, fixed on his precious burden, found no evidence of the abuse that had been rendered.

With his eyes thus engaged, instinct guided his steps towards the safety of the porch. And then it happened. Out of the corner of his eye he saw it, but another step elapsed before his mind was able to tear itself loose from its cataloging of the multitude of ways in which he had cheated his fate and escaped the disappointed, somewhat accusatory looks his wife would have been quick to provide had the art piece been reduced to pieces. Maybe it was the fact that its colors were such a perfect match for its surroundings, or the fact that it lay perfectly motionless on the ground not two feet from his present location, but it took much longer than it should for his mind to associate the distinct diamond images on the long, twisted, silent, slithery shape, a step to his left. It took less time thereafter for the arrowhead-shaped cluster of scales to become visible at the end of the tail, and even less for the menacing look of the slanted eyes and purposeful raising of the wedge of a head to sink in.

His mind did not perform a quick inventory of the carefully constructed strategies that he had spent all those past occasions formulating. It did not recall the dreams and assess which avoidance techniques had proven to be successful in these nocturnal simulations and which had been lest than optimal. It did not reflect upon the many examples of proper etiquette as played out on the silver screen wherein the heroes of his now distant youth had survived just such circumstances. No, it did none of these things. Instead it sent an immediate, urgent request to the muscles of his left leg to propel him at all possible speed to the right, which it did. It then sent a subsequent request to his right leg to prepare for landing, which it did. Unfortunately, the landing involved the unplanned participation of the dangling power cord, which wedged beneath his right foot. The cord went taut and his momentum propelled him through the atmosphere for an adequate distance such that his landing, however painful and undignified it might be, was at a spot safely beyond the striking distance of the onlooking serpent. It is hard to know if snakes laugh, even silently to themselves, but there was a look in the eyes of this particular reptile that could only be described as a blend of mirth and contempt. Otherwise it had no reaction. It did not strike. It did not even coil. In fact, it did not even move. That is probably good, because the time it takes one to extract oneself from a power cord when ones face is buried in the dirt and ones hands are pinned beneath the shattered remnants of an anniversary present from years gone by and one is very old is easily adequate for even the least talented snake to mount a serviceable offensive.

Perhaps it was the shock of impact, but the diamond shapes that were clearly on the back of the image of the serpent that had taken residence in his brain moments earlier were now missing, as was the rattle he had clearly seen on the end of the now pointed tail. The sinister slanted eyes and wedge shaped head had also been replaced, and this new intruder, who though long enough, was perhaps a foot and a half shorter than he had been in the recent past, was considerably less threatening in demeanor than the reptile that had occupied the spot only moments ago. But the mixture of mirth and contempt were still clearly there in his eyes as he slunk slowly away. There may even have been a slight trace of the sound of laughter.

Merry Christmas from all of us at Relatively Random!