I am a bit of a concert junkie. I love the hype, the crowd and the concession stands. I love inspecting the stage setup, watching the crew making the final adjustments, and the cheers as the lights go down and the artist takes the stage.   But, most of all I love the music.

This month I went to see my first concert of the 2015 summer season. Ed Sheeran was performing at the Constellation Brands – Marvin Sands Performing Arts Center in Canandaigua, NY. It was the perfect night for a concert…clear skies and a cool summer breeze, all set in a perfect venue. I had no idea what to expect for a crowd. Yeah, Sheeran’s young and popular and there was a heavy representation by the teen to twenty something girls…but there were people there ranging from their thirties right up to their seventies. A surprising range for such a young artist.

As the lights went down, Sheeran walked onto the stage, carrying his parlor sized Martin acoustic guitar, taking his place behind one of two microphones surrounded by four floor monitors and his pedal board.   That’s it…no band…just him.   I had seen him play on various awards shows, and watched him play with the use of his looper pedal, but did not expect this setup for his entire show.

Being a musician of sorts myself, I always approach a concert with a bit of a hidden agenda…and that is to take away some morsel of knowledge that will help take me to the next level in my own craft.   So, even though I sing along with the lyrics at the top of my lungs, strum air guitar, and gyrate around in a manner that would embarrass most Methodists, I’m paying attention to the class that’s being held on stage….and that night, Sheeran was truly the professor. His ability to mix high energy, soulful falsettos, gorgeous chord voicings, and intricate rhymes is nothing short of astounding.   Adding to that the fact that he constructs each and every song from scratch on stage, live, as the whole crowd watches and claps along…done so cleverly that most don’t even realize the magic that is taking place before them, is simply amazing.   For me school was in session and I was in my glory. 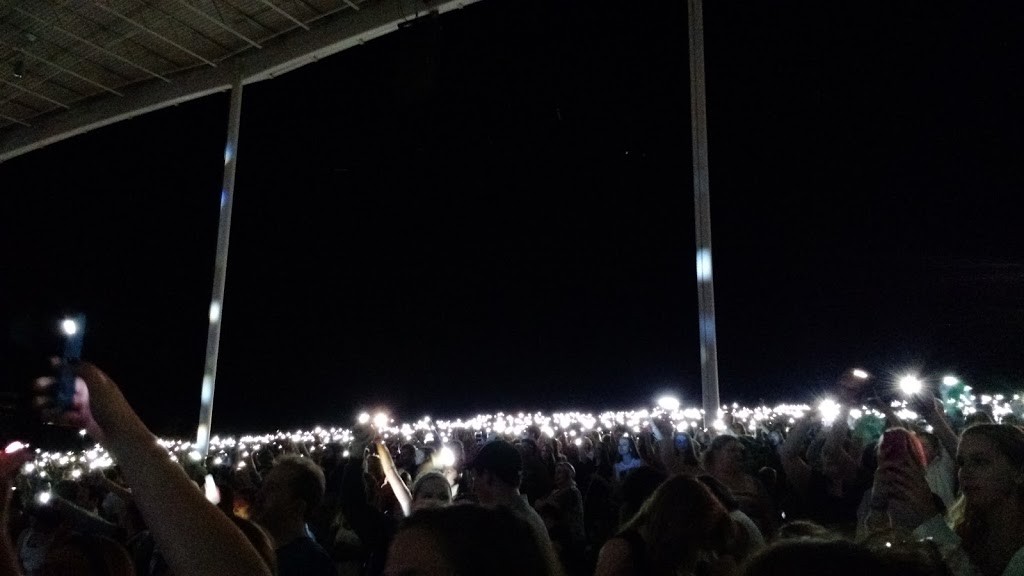 He started out the night with I’m a Mess and then into the ever popular Lego House, followed soon thereafter by his Superstition/Ain’t No Sunshine medley cover.   Before too long, he pulled out his Fender electric for the melodic ballad, Thinking Out Loud…and a couple songs later an outstanding tribute to Stevie Wonder with I Was Made To Love Her. Each song perfectly assembled, showing high energy at one moment and raw emotion the next. There was a proclaimed ‘official last song’ followed shortly by an encore.   The whole time the crowd was on fire, singing, dancing, cell phones lighting up the sky.   At one point there was a scream of girls that rivaled that seen on the Ed Sullivan show when the Beatles took the stage…it was deafening.

Ed Sheeran is a great musician, and he’s a phenomenal live performer.   I’m looking forward to more great music out of this young musician from across the pond. I could not think of a better artist to start off my concert season for this year. I walked away with ears ringing and my soul satisfied by a night of watching a musician perform his craft in front of thousands of adoring fans.

I visualized her path, serpentine by my way of thinking. Unstructured. Purposeful but inefficient.