“Two roads diverged in a wood, and I—
I took the one less traveled by,
And that has made all the difference.” – Robert Frost

When setting out to hike the thirty-five 3500’ Catskill Mountain peaks, sixteen of these will require taking the trail less traveled.   While many of the 3500’ summits in the Catskills can be reached by well marked DEC trails, there are some that require what is referred to as a bushwhack, either all or in part.

Having spent most of my hiking career being guided by brightly colored blazes on trees and rocks, with very little risk of getting lost, the idea of leaving a perfectly good trail and making my own way through the forest to a peak that isn’t even within sight, was a bit unnerving. …Actually it was a bit more than unnerving, it was frightening. 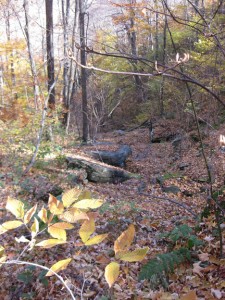 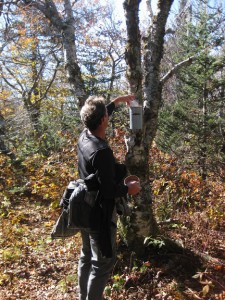 Every bushwhack hike is a little different. Some of them have a DEC trail that gets nearly to the summit, and there’s only a short off trail excursion required to reach the peak.   Others are nearly entirely off trail…often requiring trudging through miles of thick brush, nettles, creek crossings, and ledges that you have to negotiate to reach the top.   Occasionally a herd path can be found that makes the climb a whole lot easier…but it’s not common to find one until you are very close to the top of the mountain. Unlike hiking trailed peaks, the trailless peaks have a canister somewhere on the summit containing a notebook and some writing implements for you to record your name in hiking history. I’m not saying it makes it all worth it, but it does add some fun to each hike.

Fortunately, coordinates for many of the peaks can be found online. So, if you have a GPS or are really good with a topo map and a compass, the chances of reaching the summit are greatly increased.   There are also some very good sites that give detailed descriptions of each hike, offering tips on finding the best approach and obstacles to avoid.   Catskill Hiker and Catskill Mountaineer are two of the sites I have found to be the most useful.

After several of these trailless adventures, the fear of ending up wandering through the woods for the rest of my days has decreased greatly…and that first step in to the unmarked forest can be quite exhilarating.

When Robert Frost penned the words of his poem “The Road Not Taken”, he lead the reader through the process of choosing between two paths that would undoubtedly have very different outcomes, and the choice of the one less traveled, appeared to have been the right one… when it comes to hiking the Catskill Mountain 3500’ peaks, taking the trail less travelled isn’t just the right choice, for sixteen of these peaks, it’s the only choice.

Check our our full series on hiking in the Catskills…

The Devil’s Path – The toughest hike in the Catskills

Catskill Mountain Hiking…Gear Up, Wrap Up

Devin’s throat was raw from the scream that tore through it when the gun was fired. The scene burned into his mind’s eye. It…