For all of nearly 50 years I have been under the spell of a beguiling mistress. I have succumbed often and eagerly to her charms, happily abandoning logic, wisdom and good judgement and, truth be told, a considerable amount of money in the process. It has been a love affair as intense as any Hollywood could create, and has been by spells compelling, frustrating, rewarding and discouraging, but it has always endured. But although I have sacrificed much of my pride and respectability in pursuit of this enchantress, I have clung faithfully to one unwavering principle regarding the object of my affection. She must be good enough to wax. Not just that you can wax her or should wax her, but that you WANT to wax her.

Over the years my mistress has transformed, sometimes gracefully, often not, into many different automotive forms. Even immersed as I was in her sense-numbing nectar, practicality would occasionally dictate that I compromise desire for utility and here a truck or there an econobox would appear and linger as long as I could stand before I thirsted once more for the deeper passion that could only be sated by the sultry form of my true love. Here of course I speak of the Ford Mustang.

In actuality, my attachment to Mustangs began before I could drive…legally at least.   I had put together plastic models, acquired HO scale versions that travelled over scale miles of plastic track paid for a few sections at a time from lawn-mowing money, and read all the brochures cover to cover that I got from accompanying my dad on his annual pilgrimage to the Ford dealer’s new model open house. It was no surprise therefore that my first car, purchased partially on credit, a fact that immediately set the tone for my willingness to abandon reason where desire was concerned, was a 1965 Mustang. I remember my dad’s comment when he sat nervously in the passenger seat of this high-mileage questionably reliable Ralph Nader agnostic sleazy used car back-lot wonder as I attempted to extract every erg of energy available from the 200 straight 6 that whined apprehensively from beneath the sleek long white hood: “Do you think it would be a good idea to test the brakes before you see how fast it will go?” I did test them, at the end of the test drive, and they worked well enough. I was hooked, and have been since. 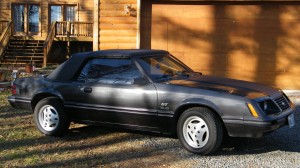 Over the years I have been owned by numerous Mustangs, as well as their close Mercury cousins the Cougar and the Capri, and each has been special to me in their own way. They say your first love is your best, and although that may be debated, it would be hard to deny the attraction I had to that first Mustang. That being said, two others have stood out from the rest enough to garner special affection. The first was a 1984 charcoal gray GT convertible with a 5-speed manual transmission. This was one of the few cars I have ordered equipped exactly as I wanted, and it was the source of immediate angst as the promised 5-6 week waiting period turned into two and a half months, and I was not fit company to be around when my repeated trips to the dealer to see if it was parked out back awaiting prep each ended in disappointment. When it finally came it was immediate total bliss. I cannot say if she led me to abandon my law-abiding ways or I enticed her, but suffice it to say that when we were enjoying each other’s company regard for government regulation entered a period of serious decline. For one glorious year we were the fastest thing on the road, or near enough so that the challenges from the occasional obviously superior adversary could be graciously declined without putting too much of a dent in our mutual self-esteem. I dubbed my ride the “Parkway Prowler”, and she did her best to earn the name. But time passes, and the summer of exuberance turned to fall and pleasant more mannerly top down drives through the vibrant colors of autumn became the norm. Then winter came and a shed was fashioned to shelter my passion during the long dreary months ahead. These were interrupted only with regular visits to the shed to start the Mustang and let her run at idle while I basked in the still fairly new car smells to the accompaniment of the sounds emanating from the premium sound system featuring the electronically advanced Dolby auto-reverse cassette player.   Spring finally came and with it the anticipation of new encounters where the pleasantries of competitive domination would surely once again be the norm. But the new year brought change, and every car that mattered was now faster. But my affection for searching out the limits of our relationship did not diminish.   I simply found more secluded locations where our joy could endure uninterrupted. She was still fast enough.

The second stand-out relationship is the one I currently enjoy. Nor is this a “love the one you’re with” affair. This connection has been cultivated with much anticipation and forward planning, an oddity for one so usually driven with heat of the moment passion, and its arrival was inevitable from the first rumbling of a 50th anniversary re-make of the greatest American automotive classic ever produced. The general justification here was that my first car was built exactly 50 years earlier, and that an opportunity for that type of milestone would not occur again in my lifetime, and if I were to own this car till the day I left this world I could, at least automotively speaking, die happy.

I speak here of a magnetic gray 2015 convertible with a 4-cylinder turbo-charged 315 HP engine married to 6 speed manual transmission. The marketing minds at Ford chose to call this power plant Eco-Boost. Now I am as supportive as anyone of the concept of greening up the planet, but I confess my interest here runs more towards blackening up pavement, which surprisingly enough this car will do in third gear. Given that, I actually find the term a little offensive to hang on a car with this much performance potential. I will admit that I do not find the 32 plus MPG that this thing will achieve if one is to stop paying attention to its intended function and just hang with traffic at 80 or 85 on a reasonably flat interstate offensive, but it was far from my prime motivation in this acquisition.   In fact, I could not have even presented that as my incentive in any credible fashion to anyone who might have a vested interest in my monetary expenditures. I think it is well documented that I was moved more by the little toggle switch conveniently located on the center of the dash that allows one to enter into “track mode” and all that it has to offer. Now for the speed is everything crowd let me be very clear here. This car is fast. As fast as the GT from just a few years back. It is, however, not the fastest thing on the road…not even for the first glorious year I have owned it. It is not even the fastest Mustang…not by a long shot. But it is quick. It is what I like to call fast enough. Fast enough to shatter the speed limit in any state in the union and do in right away.   My doctor who fears the effects of even caffeine on my heart-rate would probably think it is more than fast enough, but I have not discussed this with him. I am not sure I took his potential concern into account as much as the extra $7,000 price tag that went with stepping up to the GT, as was my immediate instinct, when concluding this decision to be the only viable choice. That and the rumor that for another 500 American dollars Ford Racing would put a tune on this engine that would give it another nearly 100 HP without voiding the warranty. I’m not sure if that ever really came to fruition, but there is a shop locally that will apply the tune for about $500. Coupling that with the lower weight of the turbo (I’m sorry, there I go again) would make it a car to be reckoned with.   Even with this stock power plant, performance could have been improved with, aptly enough, the performance package.   Mostly that is better rear-end gearing, but comes with suspension improvements as well (although the standard version corners faster than I will), but it also comes with a set of black wheels and summer-only tires. This last was enough for me to decide I didn’t need it, regardless of my doctor’s feelings in the matter, as I am too old-school to embrace blacked out everything as the height of automotive beauty. I am more of a chrome it if you can see it kind of guy.   That notwithstanding, the sleek lines of the 2015 don’t offend me despite their lack of brilliant trim.   Even the wheels that come standard with the turbo are somewhat subdued, but are still attractive enough nonetheless.   I did not intend leather seats due to the Arizona heat, but they are cool looking, and cool to the touch with the flick of a switch. Hot too if the need should ever arise. The interior is inviting and in my opinion is the greatest improvement out of many over the last design. It is truly enjoyable to be in. Getting in is of course a different matter, and is the only thing in a “I can’t find anything I hate about this car” car that is of any irritation. In fairness, 50 years ago I would not even have noticed.

As I say, it has been a year. The 50th anniversary hype and the gotta-have-one feeding frenzy has long-since subsided. But like any good relationship, ours has grown over time.   I cannot say we yet have truly discovered each other’s limits, but we are closer. We have in fact not even recorded our flirtations on the “for track use only” feature that allows one to keep track of fastest elapsed times and such, and I have never been as much concerned with those numbers as the feeling that comes from achieving them and the satisfaction that only happens when a spirited car is driven as God intended. No relationships are without their ups and downs, and this one has been no exception, as the hot Arizona summer brought a brief period of intermittent separation, with the Mustang hunkered down in a shed fashioned for the purpose of protecting her from the ravages of the monsoons, where she was occasionally started and allowed to run at idle as I enjoyed the almost new car smell while surrounded by the sounds emanating from the satellite radio. But we are reunited now, and I still feel as excited to walk out to the corral and saddle her up as I did a year ago, and I still turn and look back over my shoulder when I leave her as would be true of any great love. The 2015 Mustang may not have earned Car of the Year honors, but in a lifetime of cars it has been a car of a lifetime for me. But the greatest compliment I can give her, and it goes to the depth of our relationship is simply this; she is good enough to wax. 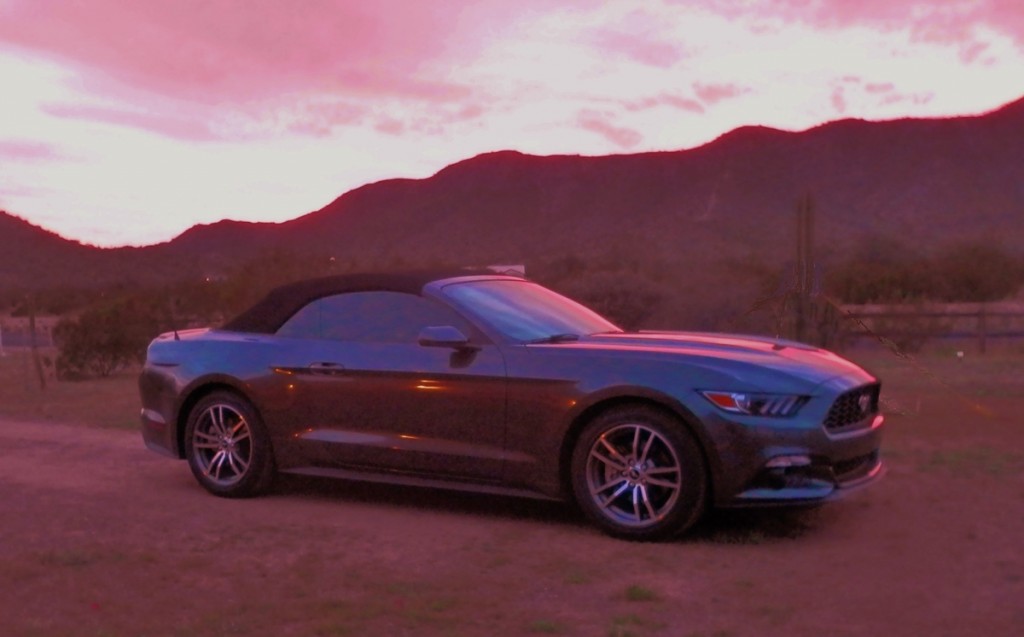