I’ve never been accused of being an athlete, let alone an endurance athlete. From the very first pair of Sears Husky Toughskins Jeans that I was forced to wear, my idea of endurance was making it from breakfast to lunch without passing out.

A few years ago, my friends talked me into entering a marathon relay with them. I reluctantly agreed, but to put things into perspective, the last time I had actually ‘run’ any distance had been decades ago, and even then, my longest running distance was probably one mile. Why I agreed to enter an event where I’d be expected to run 6+ miles is still a mystery to me, but I did, and I’ve been enjoying it ever since…sort of.

I’ll admit that I hate training for a race, of any distance. It’s not so much that I dislike the running, but it’s the whole idea of running on a schedule for the intended purpose of an event. It just feels too regimented…but it’s all part of the process. I hate it right up to the event…and then on event day…all is good. There is something really fun about being part of a race…no matter what the distance. There’s a lot of excitement, music is blaring, there are signs and banners up everywhere, people cheering, and it is just a fun day. Usually it is fun enough that the pain I endured to prepare for the race has subsided and most often, I’m ready to sign up for something new as soon as the race is over.

This year, my brother and I entered the SMP River Challenge Paddle Tri in Rochester, NY. We entered as a relay team with me running, my brother biking, and then both of us paddling in a canoe on the Genesee River. The race is held in mid April of each year, and it’s a great way to force yourself to start getting outside and exercising…even when the body and the weather fail to cooperate.

I don’t remember when we actually signed up, I just remember that it seemed like it was not enough time to get my ‘have not run since fall’ body into the kind of condition needed to not make a complete fool out of myself. My brother is an actual bike racer, he admits it; he’s part of a team, and he rides on a regular basis. So, this event was not the stretch goal for him that it was for me. Despite the odds, I proceeded to drag my tired self out into the cold late winter air and started running. We even found some time to get out on the river and practice our paddling. 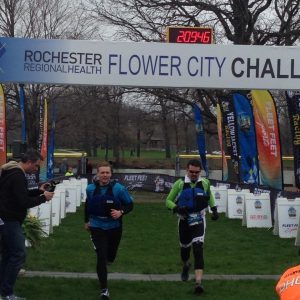 Before we knew it, our training time had come to an end. On the morning of the race, we had to be there early to get our 30-year-old rental aluminum canoe staged for the paddle portion of the race. Compared to some of the racing craft that was there, it seemed we had brought a knife to a gunfight, but that did not dampen our spirits. With my brother’s bike in the transition, we were ready. The run was the first event, so at 7:33AM, I took off with the rest of the Tri-Team runners. The anxious nerves of standing around waiting quickly subsided and my goal was now to cover 3.1 miles as fast as I could make my unprepared self go. I felt pretty good as I made my way along the race route, passing some, and being passed by others. As I approached the transition area, the excitement of being done with the run and handing off the timing bib to my brother gave me a short burst of energy and before I knew it, he was on his bike and gone. After a short time, bikes started to come back. I had a rough idea how long my brother’s 20 mile ride would take and I was ready when he got there. A quick shoe change and we were running to the river for the canoe paddle. Race helpers got our boat in the water, we grabbed our life jackets, and we were off. The first half of the three-mile paddle is with the river’s current, making the second half a bit more work. Being admittedly poor paddlers, we held our own, and though we made no exciting passes on the river, we did not lose any ground, or water, in the process. As we reached the end of the paddle portion, volunteers were there to catch our canoe and we ran the final short sprint to the finish line. Success…no we did not win, we didn’t even get a trophy, but we had done our best and were competitive for the whole race.

So, what’s the point of this whole article? Well, it should certainly not be confused with any form of training advice. There are lots of folks on the interwebs that are qualified to provide that expertise, and I am clearly not one of them. My goal at the beginning of every run is to simply return under my own power with no help from paramedics of any kind. This article is written for that person that might be thinking about taking up running, or biking, or even swimming or paddling and is looking for the motivation to get started. My advice is this: find an event that you can do alone or even better, with a team, spend the small amount of money to actually commit to the race, and start training. It likely won’t be fun at first, but it will get easier. The reward, in addition to making a healthy lifestyle change, will be race day. It’s hard to describe the feeling of being part of a race like this, but it is a great feeling, and who knows, maybe you’ll get hooked. Just Tri it…

This past month I had the outstanding, unbelievable, unforgettable, and once in a lifetime opportunity to see Jeff Lynne’s ELO “Alone In The Universe”…