I’ve called myself a mountain biker for the past two decades.   I’ve owned a variety of mountain bikes, ridden all sorts of terrain, and seen my skills sharpen and erode in a repeated pattern as life’s obligations consumed more than their fair share of time, leaving my time on two wheels to suffer.  Throughout this time I’ve always been tempted by various forms of fat tired racing, but I was always able to come up with a long list of reasons why it didn’t make sense.

This past winter, a series of clicks, scrolling, and googling led me to the home page of the Adirondack Black Fly Challenge, a 40 mile point to point gravel grinder in the heart of New York State’s beautiful Adirondack Mountains.  Could this be the very event that would finally trump my list of excuses?   The short answer, yes.

In a moment of complete and utter weakness, I filled out the registration page, entered my payment info, and clicked on Submit.  There, I had done it.  I was committed, or maybe should be.   I now had 4 months to get myself from can’t ride more than 10 miles to racing for 40 miles condition.   If you read my article on my recent running race, you realize that I’m not an athlete of any caliber.  If there were negative calibers, I might fall into that category.   So, given that I had a running race in late April, my inability to multi-task and run and ride at the same time meant that my serious biking training was not going to happen until late April, leaving me with only 2 months of serious training time.   I was able to get in some hours on my indoor trainer, which meant that by the time I would get outside to do some riding, I did have quite a few miles of stationary bike training.

Since this isn’t really about the training process, we’ll skip the boring details of my attempt to get ready.  Needless to say, I had successfully logged enough miles that I felt prepared to enter the race and likely finish the race.

The Black Fly Challenge has been going on for 20 years.   On the even years, it runs from Inlet, NY to Indian Lake, NY.  On the odd years, it reverses.   The event starts and ends on a bit of pavement, with 30 solid miles of seasonal use roads in the middle.  The Adirondack mountains are known for their blood thirsty Black Flies each year in the June timeframe…thus the name of this event, which is always held the second Saturday of June.  There are classes for mountain bikers, cyclocross riders, and even tandem bikers.  I was riding in the Mountain Bike category.

Speaking of mountain bikes, earlier in the spring, I had been given the opportunity to sign on as a KTM Bicycle Ambassador.   KTM, a brand known for outstanding motorcycles made in Austria, had a not quite related anymore bicycle manufacturing company.  KTM Bikes have been made and sold in Europe since the sixties, only recently coming to the US.  My bike is the carbon fiber Aera Comp 29’er.  A light weight, nicely spec’d hardtail mountain bike, with matte black, orange, and blue finish that looks fast sitting still.   This was my riding weapon of choice for the Black Fly Challenge.

Back to the race…  We got into town on Friday afternoon.   I wanted plenty of time to pick up my race packet and do some relaxing before Saturday’s race.   It was a beautiful, sunny day, with perfect temperatures as we got into town.  The buzz around Inlet as racers were showing up to sign in was exciting and fun to be a part of.

Saturday morning brought a different twist to the event.   Rain and cold temperatures.  Nonetheless, this was race day, and things were going ahead as planned.  With a 10:30AM start time, it seemed reasonable to get to the parking lot by 9:30AM to get time to get the bike setup and get in a little warm up ride.  By the time we got parked and situated, the rain was steady and heavy, and the idea of warming up in the forty degree temps was far from desirable.   So, I spent much of the next half hour huddled under the hatch of my Jeep and waiting to make my way down to the start line.   I had managed to stay somewhat under cover until the 10:15 AM racer’s meeting, but for the next 15 minutes, we were all sufficiently soaked and shivering.  Some racers added layers of clothing, while others just sucked it up and waited for the race to begin.

Promptly at 10:30AM, the race started, and 760 of us made our way out of the starting area.   We were running the beginner’s class, so we lined up about midway back in the pack.  That was a mistake.  Despite being beginners, our pace was a bit better than some of those we lined up with, so after nearly a minute and a half of barely moving, we finally reached the official start line, and were stuck in traffic for the first couple miles.

As the pavement ended and the gravel began, so did the climbing.   As I pedaled my way up the first wet and rutted hill, I knew that this was going to be no walk, or ride, in the park.  Nonetheless, despite the challenge before me, I did my best to stay focused and to keep forward momentum as I made my way up a very congested hill of riders.   Once we got to the top it was now time to experience some downhill riding.   Despite the questionable traction, I did my best to take advantage of gravity and was able to start to make up some ground on the faster climbers on the downhill sections.  This pattern continued, hill after hill.   After several descents, we came to a long flat section of road.  At first this seemed like a great thing, a chance to pedal hard and make some good time.  But wait, there was something different, the surface was no longer gravelly, no it was different, it was sand, wet sand.   I quickly learned that a mountain bike does not roll through wet sand at all…it takes full on pedaling to keep your bike moving in the direction of the finish line.   So much for getting a little breather on the flats.   Once again we were climbing, with the most brutal climb being at about the halfway mark.   My only goal was to not have to get off my bike and push it. 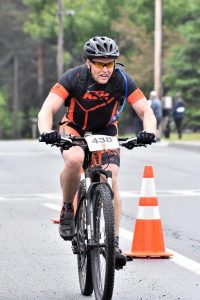 The race continued on, climbing, descending, pedaling on sand.  At this point the drivetrain of my KTM Aera Comp was starting to make noise.   At first I thought it was an adjustment issue, but I soon learned it was just all the sandy grit that was accumulated on all the moving parts of the bike.

With about six miles to go, we were back on pavement, and it wasn’t flat.  There was more climbing to be done.  I focused on keeping my pace where I wanted it, and was able to pick off a few more bikes before reaching the cones which was our last opportunity to do any passing.   The final single file stretch seemed like it was taking forever, but two hours and forty eight minutes after taking the starting signal, I had finished my first ever Black Fly Challenge.

Post race, there was live music, cold beer, hot food, and awards.   The entire event, from registration, to the race, to the course marshals, to the post race festivities was outstanding.

The Black Fly Challenge is definitely a great event.  If you’re a first time racer, or have been pedaling competitively for years, it’s a worthwhile race to enter.   I know I’m hooked and I’m already looking forward to returning next year to try it all again…in reverse.

For more information on the Black Fly Challenge, visit blackflychallenge.com

It was with great anticipation that we waited for tonight, the opening of Disney’s latest release, Beauty and the Beast. A tale as old…