When you’re a kid that grows up in the some of the prettiest mountains in the country, one would think that’s where you would go to find your inner peace, your bliss, your zen. But when you’re a mountain kid who lives in the desert, it’s the smell of salty air, the temperate clime, and the ocean breeze that renews your soul. That’s exactly what I found this weekend in San Diego.     I was able to find a decent hotel for a relatively decent price (< $200/nite) that was in close proximity to everything I wanted to do, and also happened to be housing the Portland State college basketball team. The last bit was just random happenstance and had no bearing on me choosing the hotel, but it was still fun to stand next to a guy a foot taller than me and listen to him order a small Starbuck’s drink that looked more like a sippy cup in his hand than a latte. Over a two day, two night visit I was able to frequent a prime local attraction (Sea World), and two local restaurants that I would definitely encourage anyone to try, given the chance.

Sea World was everything you would hope it to be. Lots of learning, lots of shows, and adorable animals that you wouldn’t normally get to see, let alone see up close. We made three “extra adventure” purchases at the start of our day. The first was the “All Day Dining” wrist bands. It was $35 for each adult. The first meal we ate would have come to $38 with an entree, side, and drink each. The second would have been $37. We ate a third time and more than got our money’s worth. The red velvet cake is delicious, and I didn’t even feel bad about it, considering the number of miles I walked over the course of the day. 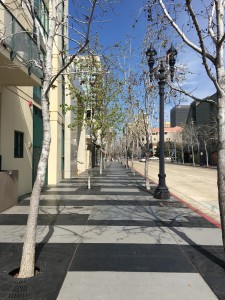 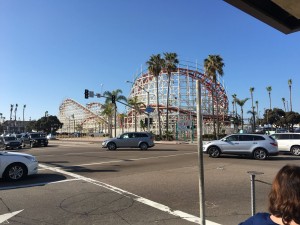 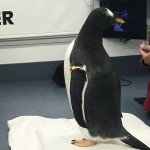 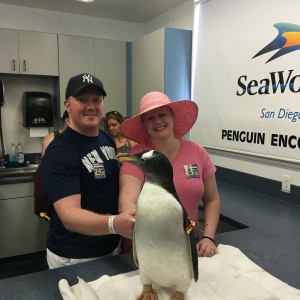 The second and third extras were animal related. For $50 per person, my wife and I got to take a back stage tour of the Penguin Encounter. Not only did we learn that Sea World makes 6-8000 lbs of snow daily to fill the encounter, but that a penguin can hit an employee with a high power stream of feces at a good 3 feet away. That’s entertainment that you can’t put a dollar figure on. Though I do suggest hand sanitizer afterwards. We met and got to pet a 4 month Adelie penguin. He was quite the talker, and was surprisingly soft, due to his 60-100 feathers per square inch. The next stop in the tour allowed us to meet a 30 day old baby Adelie and that’s when I realized what “soft” actually meant. The down that covered this little guy made you want to snuggle him and never let go. 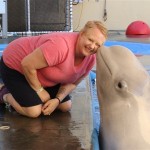 Our next encounter was on the opposite end of the size spectrum. After the 2 foot tall Adelie, the 13 foot long, 900 lb, Beluga whale definitely qualified as mammoth. For about 15 minutes we posed as Sea World trainers and had our baby Beluga waving, singing, and even giving good bye kisses. It was the perfect end to a day of exploring what sea life is like in the Pacific.

After a quick trip back to the hotel for a shower, we headed to dinner. We found a great local place in Pacific Beach called The Backyard Kitchen and Tap. Since we did a good job of sampling most of what the Sea World restaurants had to offer, 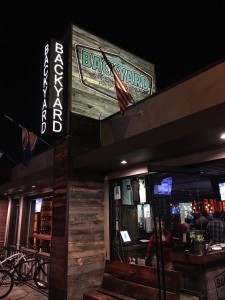 the stop in at Backyard was a light affair. We ordered three appetizers including, bruschetta, baked Buffalo wings, and a meat and cheese board. The servings were ample and delicious. They also feature a full bar and a great wall mural breaking down different makes of Whiskey, Bourbon, and Moonshine. The venue itself was enormous, with ample TV’s, pool tables, and even indoor fire pits. You can’t go wrong at Backyard either for dinner, or just apps and drinks.

After a well deserved night’s rest, we made our way to downtown San Diego for breakfast. The restaurant we chose was Cafe 222. At 10:00 AM on a Sunday morning we only had to wait about 15 minutes for a table that was outside on the upstairs patio in the glorious Southern California weather. After seeing several pancakes bigger than my head pass by the table, I decided to go with bacon and eggs so as not to induce a diabetic coma. I will admit to stealing a few bites of my wife’s waffle when she wasn’t looking though. It was expansive in its own right. The food was excellent, as was the service. We were on our way in about 45 minutes, walking from there to Seaport Village for a little shopping before heading home.

For a two day trip we got a lot in and had a blast doing it. Now that I’m back home in the desert southwest, I’m already planning my next trip to our more temperate neighbors to the West.

Duane has worked for Walden University for the last ten years. He enjoys writing prose, poetry, and music. He has also been known to find a stage for some improv comedy. So basically he's just making this up as he goes along.